Streaming of a White Christmas 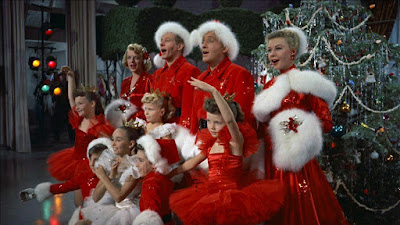 Lina has had us watching a streaming series about Pablo Escobar, but agreed with me that it mightn’t really do for viewing on December 24. I know that the traditional American movies for this occasion are either It’s a Wonderful Life or Die Hard, but we felt that neither of these would be endurable. She vetoed the Alistair Sims  Christmas Carol. All of the Xmas-themed selections on our two services looked intolerably treacly. Ultimately we settled on the 1954 production (Bing Crosby/Danny Kaye/Irving Berlin/Michael Curtiz) White Christmas, which we’d gone all these decades without catching hitherto.

It was curious for us to reflect that this was “popular culture” when she and I were toddlers. The society it depicts is figuratively fat, happy, prosperous, complacent, genially and unselfconsciously sexist, sentimentally militarist (“Gee, I Wish I Was Back in the Army”—easy for you to say, Irving), and, with the exception of a barman in the club car scene, the film features a cast as white as the snow that eventually does fall [spoiler alert] on Christmas in Vermont. I observe none of this by way of sneering—for some, perhaps many of our own cultural assumptions, however self-evident they may appear to us and however comfortably we hold them, must inevitably strike posterity as outlandish or worse—but merely by way of emphasizing how strange it is to contemplate having existed in that milieu, even if its salient characteristics lay at the time entirely outside my own purview.

It was curious as well to consider, not for the first time, that it has been less than a century since, with the introduction of “talkies,” human beings have been routinely granted an experience dreamt of by our forebears for millennia: the phenomenon of seeing the departed dead and of hearing them speak. Talk about ghosts of Christmas past! Crosby, Kaye, Rosemary Clooney, Dean Jagger and all the other speaking parts with just one exception are at present doing business on the other side of the sod, but there they all were, summoned forth from the æther to sing and dance and camp it up for the patronizing delectation of a couple of jaded old coastal urbanites on Christmas Eve. Funny ol’ world.

Posted by Rand Careaga at 9:28 AM No comments: