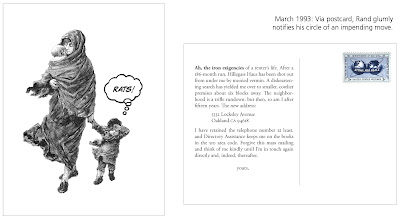 After a youth spent in the postwar suburbs of southern California, the first time I lived in a house older than myself was in Santa Cruz. It was a rundown, ill-maintained Victorian rented out to undergraduates as individual rooms, and I didn’t care for it. I spent a summer the following year in a pleasanter house of the same vintage, but I never did warm to the Victorian feng shui. Then I moved to Oakland. I lived for fifteen years—from mid-September 1977 to mid-March 1993—in a lovely craftsman bungalow in Oakland’s tony Rockridge district. I was married when I moved in; divorced a few years, and still in shock a bit from the dreadful endgame, when I was compelled to vacate the premises twenty years ago today. I had externalized a great deal of my identity back then, about half as “husband” and the rest as “the guy with the cool old house.” It was accordingly a mere wraith that limped away from the house on Hillegass Avenue to inferior and charmless premises a few blocks distant.

Today I live in an area I would then have derided as “Baja Oakland,” in a rapidly gentrifying neighborhood (and young: I confess that I regard the reliably middle-aged and prosperous sidewalk population on College Avenue as a bit more simpatico) and a house in some respects as good as and in some others better than the old place. I still regularly find myself in dreams back at Hillegass—generally in a state of panic, realizing that the new owners are due back at any moment, and that I must needs decamp.

Anyway, here’s a close re-creation of the postcard I sent out (social media being then at a somewhat primitive stage of its development) to friends announcing my forced relocation. I was feeling...ill-used.

Posted by Rand Careaga at 6:30 PM No comments: