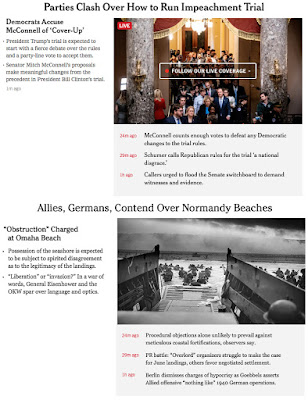 I’ve had the New York Times bookmarked for a couple of decades, and followed it behind the paywall long ago, but I’ve detested its political reporting since its cheerleading for the Cheney Shogunate’s warmongering, and particularly for its Clintophobia. I take particular exception to the paper’s pious pose of “objectivity,” which requires it, apparently, to report upon the criminal cabal now holding office as though this was just one more administration.

The graphic posted here consists of a screengrab from this morning, and my own imagined webpage depicting how the NYT might have reported D Day, by its current editorial standards, in 1944.
Posted by Rand Careaga at 5:17 PM No comments:

Not that future—the other one 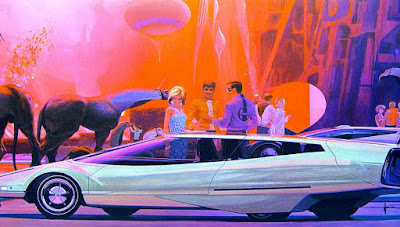 Noted commercial illustrator Syd Mead, the “visual futurist,” pegged out at the end of last year. Most of his work had the vibe of the Sixties dialed up to eleven: sleek, stylish, streamlined, almost antiseptic in its modernity; the twenty-first century as James Bond might have imagined it, partaking much more of The Jetsons than of Blade Runner—although of course Mead had a considerable hand in the design of that dystopia. At least he made it past November 2019.

Posted by Rand Careaga at 9:55 AM No comments:

Living in still another future 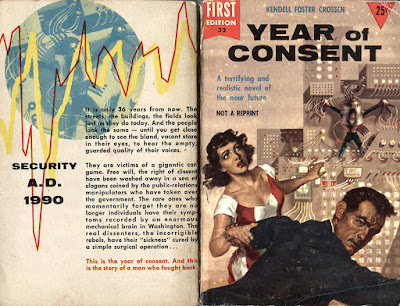 Welcome to “The Twenties.” It’s a relief getting back to a decade naming convention that rolls off the tongue, unlike the last two. On the other hand, it appears likely to be a dire one content-wise, and there’s a not-inconsiderable possibility, at my age, that I won’t feature in the opening credits for “The Thirties.”

“Science fiction” has historically tended to be blinkered by the era in which it’s written, so that, for example, descriptions of spacecraft controls used to feature a lot of buttons, switches, and needle gauges. Sociologically, likewise, there wasn’t much thought—making the honorable exceptions stand out that much more vividly—given to, say, how gender roles might evolve. But even a blind squirrel, et cetera, and I’m struck by the prescience of Year of Consent, an otherwise unmemorable mass-market paperback in which the implications of applying modern advertising techniques to politics, pioneered just two years earlier by the Eisenhower campaign (I like Ike, but we’re still living with the consequences of a lot of questionable decisions made in his name, starting with that year’s VP pick and, most recently, with the 1953 interference in Iran) are pondered.

I picked this up for fifteen cents under its original purchase price when a small bookstore went out of business a few years ago (the proprietor was a good guy, but perhaps temperamentally unsuited for retail: when I’d place my pile of purchases on the counter he would spontaneously discount them: “Seven dollars?…I dunno, maybe four?” “No,” I’d explain, “that’s the way it works when you’re buying”). Published in 1954, Year of Consent depicted the dire world of 1990, when the seventy-four United States of America are governed by marketers, psychologists and “social engineers”:


The administration wanted to know as much as possible about what everyone thought and felt. What people ate, where they spent their vacations, what they talked about—all of these things were added up and passed through SOCIAC to produce complete pictures of individuals and groups. Thus, when the administration wanted to make a new move, they knew exactly how to condition the people so that it would be backed. Or they knew exactly what sort of man to put up to win a popular election. This, then, was government by consent.

Remarkably, this apparatus of manufactured consent is coordinated by a massive computer with approximately the horsepower of a first-generation “IBM PC.”:


Even in the elevator I was conscious of the vibrations, like an inaudible hum, of SOCIAC at work. The giant electronic brain filled up the first ten floors of our building. There were additional memory banks in several subcellars and in another nearby building. It was impossible not to be in awe of it [Try me —Ed.] Just as an example, it contained about 500,000 electronic tubes and about 860,000 relays. Not counting the extra memory banks, it had 400 registers totaling 6,400 decimal digits of very rapid memory in electronic tubes and about 6,000 registers totaling 120,000 digits of less rapid memory in relays.

Needless to say, punched cards are involved. Well, even Vannevar Bush’s remarkable “memex,” which was envisaged as having something like the capabilities of a modern personal computer with the Wikipedia homepage open, was conceived, in his 1945 essay “As We May Think,” in terms of microfilm and conventional projection. The hardware of Year of Consent’s dystopia is anaemic, of course, and its political environment monolithic, with a single governing authority wielding these powers of mass manipulation rather than the anarchic struggle for influence that rages around us today—although see modern China for something closer to Crossen’s vision and, perhaps, our future.

Kendell Foster Crossen worked in a number of genres over the course of his career, and also created the “Green Lama,” a Buddhist(!) superhero who was featured in stories, comics and radio programs (“The Green Lama is an alias of Jethro Dumont, a rich resident of New York City, born July 25, 1903, to millionaires John Pierre Dumont and Janet Lansing. He received his A.B. from Harvard University, M.A. from Oxford, and Ph.D. from the Sorbonne; he also attended Drepung College in Tibet. He inherited his father’s fortune, estimated at ten million dollars, when his parents were both killed in an accident while he was still at Harvard; he then spent ten years in Tibet studying to be a lama, acquiring many mystical powers in the process. He returned to America intending to spread the doctrines of Tibetan Buddhism, but realized that he could accomplish more by fighting crime, since Americans were not ready to receive spiritual teachings”). Crossen lived long enough to see the Eisenhower campaign’s crude techniques refined and deployed by Roger Ailes on Nixon’s behalf in 1968, and further extended to elect Ronald Reagan in 1980. One feels that he might not have greeted our “social media” world with unalloyed enthusiasm.
Posted by Rand Careaga at 9:49 AM No comments: