A colleague spins down toward the drain 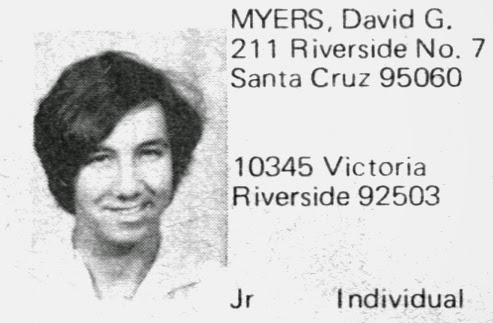 Edit: I neglected to mention that I had never heard the name “Thomas Pynchon” before David pronounced these syllables. Never! I had much to learn, and not merely from the faculty.

The term “colleague” must be here understood with air quotes, because the last time D.G. Myers and I shared a paycheck was 1974. We’d been dishwashers together for two years at what was then called “College Five” at the University of California at Santa Cruz, which at that time had an undergraduate population of under four thousand. D.G., or “David” as he was known in the dishroom, was a Lit major, and took his studies considerably more seriously than I did: I was a lazy lad, and slid through undergraduate life along whichever path of least resistance presented itself at any given fork in the road.

I used to imagine in those days that I would, once I’d grown to man’s estate, be very proud and great, and also have a tenured position at UCSC or at some equivalently easy and scenic academic venue. I was prepared to do New England. Part of the contemplated deal was that I would shed the integuments (tweed jackets, leather elbows) from time to time as I romped through the downy loins of generations of undergraduate cuties.

I understand in retrospect that this was not a realistic career path. For one thing, the professional model to which I aspired, rather thick on the ground back in the early seventies, has been hunted almost to extinction since then. I yield to no man (except, perhaps, to D.G.) regarding my respect for the late R.V. Cassill, but the cultural climate that gave rise to “Up the Down Co-Ed” is gone, gone, forever gone.

When we toiled together at the far end of a conveyor belt, D.G. and I were, I believe, politically on the same or on nearby pages. At the outset, Nixon was still needlessly prolonging the Vietnam war, and no sane man of college age (D.G. retained his student deferment draft status; I’d lost mine in 1971 but had fetched a high lottery number) was keen to be, as John Kerry once memorably put it, “the last man to die for a mistake.”

I haven’t seen David in forty years, although we’ve recently connected after a fashion online. He’s in the latter stages of what used to be called a “wasting disease”: fourth stage metastatic prostate cancer. He won’t make old bones, not least because the insubordinate cells are at present romping through the very skeletal components.

He is today and, I gather, for a few decades a self-identified political conservative. He has also been since 1989 and until a few weeks ago a professional academic, and from what I understand of that scene from his accounts and elsewhere, the conversion is not entirely incomprehensible. I attended a graduation ceremony at UC Santa Cruz in the early 1990s, and the event was so claustrophobically lefty and self-righteous that I probably would have written in Barry Goldwater had the next general election been held the following week.

I believe that somewhere on his Commonplace Blog David mentioned that his transition to conservatism either began or took impetus from domestic opposition to the Israeli move into Lebanon in 1982. Back in the dishroom days, David had casually alluded to his Judaism (he mentioned that the nervous father of a female roommate, attempting to be ingratiating, had said “So you’re Jewish, are you? My tape measure was made in Israel!”), but I was not then aware that he’d been raised a Southern Baptist before electing to convert in his late teens. He went from Reform to Conservative to Orthodox with at least notional circumcisions at each stage, which counts for “skin in the game” in my book.

I'm personally agnostic regarding most of the world's irredentist conflicts. I don't care whether or not the Kurds or the Uighars ever get spots on the maps. My relatives have their own skins in the game in Belfast and in the Pyrenees, but I lose no sleep about Irish union or Basque independence. I'm a deracinated American. And I am frankly indifferent as to who prevails in the struggle for the territories outside israel's 1967 borders.

DGM's identification with American conservatism certainly places the two of us politically at odds today, and likely for the past several elections. He likely voted in 2008 to place Sarah Palin, whose election to Wasilla dogcatcher would trouble me, a “heartbeat away” from the presidency. I personally count myself an “Eisenhower Republican,” and have voted the past three general elections the way the thirty-fourth president’s relatives did.

This being said, DGM courageously—or foolishly?—forfeited a paid gig at Commentary a few years ago when he quite reasonably argued that the GOP/conservative opposition to “gay marriage” was a losing proposition.

DGM and I probably won’t see one another again. I regret that. He was one of just three or four fellow undergraduates I knew at UC Santa Cruz (Mark Jarman was another) who was a serious scholar, and who subsequently followed that path. Myself? I tried to stay in Santa Cruz after graduation, and like most of my fellows I was shaken off after a year or two. My present gig is a profound betrayal of everything UCSC stood for, but it does pay the mortgage.

I regret that DGM will not survive me. In the intellectual sense, he deserves to. Indeed, in that realm he certainly will. Late note: the University of Chicago Press will be re-issuing Peter De Vries' novel The Tunnel of Love with David’s foreword in November.

(This post has been reconstructed (and now updated) from one posted a couple of days ago and accidentally deleted)
Posted by Rand Careaga at 7:51 PM No comments: