Raymond Loewy eat your heart out 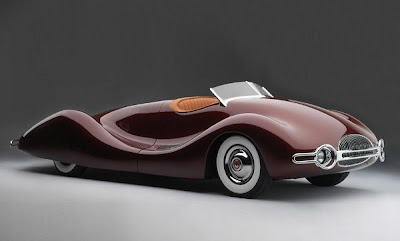 ...or accept this tribute.
A labor of love: one Norman Timbs created this magnificent creature around a 1948 Buick V8 engine. The carcass was discovered in the Southern California desert eight years ago, purchased for a song and then lovingly restored. Source page here. Heartbreaking pictures of its low ebb here.
Posted by Rand Careaga at 6:06 PM 1 comment:

The light of this and other days 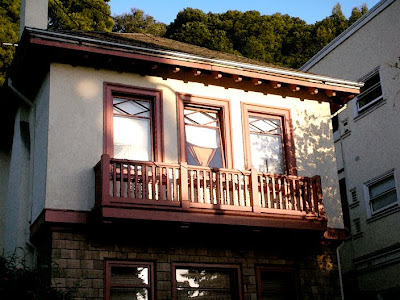 For about as far back as the writ of memory reliably runs—in my case probably late in 1956—I have felt myself oppressed by the light of mid-morning, which first burned my emotional emulsions in the parched LA suburbs of my early childhood. For quite as long, I have basked and gloried in the slanted sunlight of late afternoon. I thought of this today as I strolled to the corner store (a 55,000 square foot Whole Foods Market on the edge of downtown Oakland, lest anyone imagine I'm speaking of a tiny mom&pop grocer) in the golden rays of a Northern California early summer.
Through my undergraduate years autumn was my favorite season, but in the years since, as the brute requirements of earning a livelihood have kept me indoors for most of the daylight hours, my preference has shifted toward summer, and Daylight Savings Time: I adore the illusion of a life after work. Since the beginning of the last decade I note a shift in my emotional response to the solstice from "Hot damn! Summer again!" to a pensive "I wonder how many more of these are left in the jar?"
It's good to be alive this late afternoon.
Posted by Rand Careaga at 8:00 PM 1 comment:

She puts me in mind of Jimmy the Greek, back in the day. Particularly given that few present-day Israelis are of direct German or Polish origin, the notion that they should clear out and "go back" to those countries, from which such remnants of an earlier Jewish generation as survived the sieve of the Third Reich were justly grateful to flee, shows at best a tone-deafness to these historical sensibilities. And yet, and yet. Would Helen Thomas have entered retirement so abruptly had she weighed in on some different territorial/irredentist conflict elsewhere abroad?

The Kurds, for example: "Why don't the Kurds clear out of Turkey and move back to Iraq/Iran?" (Note that this game can be played with three corners)

The Tamils: "Can't they realize that Sri Lanka will never accept them? Why can't they just rejoin their fellow Hindus on the mainland?" (Alternatively: "The Sinhalese should just clear out and move down to southeast Asia with their fellow Buddhists.")

Or the Uighurs: "Surely these people can understand that they were never a logical fit with the Han Chinese. Why don't they just clear out and go live with the other Muslim camel-jockeys west of the Celestial Kingdom?"

See what I mean? Pretty darned offensive formulations, all of these, and any one of them might even have rated a public apology (although I doubt whether the Tamils have that kind of clout, and as for the Uighurs, the Cheney Shogunate demonstrated that these are to be shat upon with impunity). But Israel, plucky, (and periodically thuggish, although our own country has but slender ground from which to be censorious in these matters) little Israel, proves to be the third rail of foreign policy commentary.

I do not wish Israel ill, but I also do not wish it well in the sense that I am indifferent to its fate. I do not care whether the Tamil insurgency in Sri Lanka fails or prospers, and this indifference will not be taken by those who know me as a vile bias against the Tamils. An independent state for the Kurds carved out of Iraq, Iran and Turkey? OK by me. No state for the Kurds? Nichto problemo, and I trust that this will not be construed as Kurd-hatred. Autonomy for the Uighurs? I'm sure they care. I don't. A Jewish state in land also claimed as "Palestine?" Good luck with that, but no, I'm not prepared to subscribe.

Fortunately I'm not an elderly lady journalist who doesn't understand YouTube, and I suspect that HT ought to have retired some years back. I regret, though, that she had to go out on this particular banana peel. She deserved better.
Posted by Rand Careaga at 5:06 PM No comments: 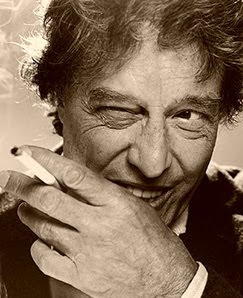 “Americans are a very modern people, of course. They are a very open people too. They wear their hearts on their sleeves. They don't stand on ceremony. They take people as the are. They make no distinction about a man's background, his parentage, his education. They say what they mean and there is a vivid muscularity about the way they say it. They admire everything about them without reserve or pretence or scholarship. They are always the first to put their hands in their pockets. They press you to visit them in their own home the moment they meet you, and are irrepressible, good-humored, ambitious, and brimming with self-confidence in any company. Apart from all that I've got nothing against them.”
—Tom Stoppard
Posted by Rand Careaga at 5:35 PM 2 comments: