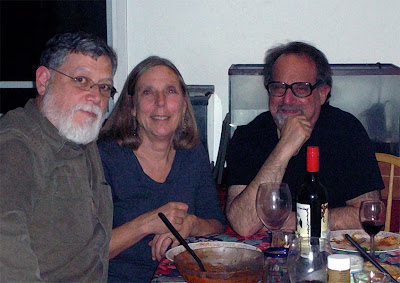 As I wrote to another friend recently, one's fifty-eighth year is a little late in the day to await the flowering of genius, and a sensible fallback position would accordingly seem to be to cultivate friendships, family ties and a rich interior life. It was in this spirit that I looked forward to yesterday's reunion with vertical-market composer Carl Stone, who never knows which of four cities (Tokyo, Nagoya, Los Angeles or San Francisco) to pine for as the work of an itinerant musician draws him hither and thither around the four cornerth of the globe, and Alison Fleck, Benicia-based landscape designer, who tends her own garden whenever she can spare a moment from creating grottoes, vistas, terraces and bowers for the privileged classes of the greater San Francisco Bay Area. I, of course, do no useful work whatsoever outside the specialized precincts of BrainDead Systems (formerly Flatline, Comatose, Torpor and Drowse), my employer since Hector was a pup.

I've known Carl for 47 years now; Alison for 41 and change. Alison and Carl probably met in 1965 or 1966 at Oakwood, a tony SoCal private school. We three have remained in tenuous contact over the years, the last reunion of the threesome being at the Crumbling Manse™ back in 2001. Saturday's reunion, which took advantage of Carl's swing through the Bay Area at the turning of the year, had us meeting at Alison's Benicia spread, in the hydrocarbon shadow of one of the region's many carcinogen-belching petroleum refineries, whence we sped away in Carl's trusty Saturn to lunch in a chi-chi Yountville beanery, where we three dined for a sum that could likely keep a blue-collar family of eight in TV dinners for a month (remind me to remind the proletariat, come the revolution, that we were rooting for them all along) before barely making the "Carols in the Caves" performance at the Clos Pegase winery outside of Calistoga. Our party's response was mixed. Carl, as a professional, took technical exceptions to certain particulars in the performance. I found it a trifle new-agey; Alison thought the lip-service to Christian themes too much lip and not enough sacrilege. I think, though, that on balance we three enjoyed ourselves in a sneering, condescending sort of way (as I remarked to Carl afterward, while I missed my chance to see the Last Supper sculpted in butter the last time I drove through the midwest in 1991, I have at least sat through "Carols in the Caves"). Actually, I give high marks to anyone who makes his living as a freelance entertainer, and give "Improvisator" David Auerbach bonus points for showmanship and and a decent level of competence with, if not in every instance actual mastery of, the "fifty rare instruments" he has taught himself to play.

It was good to catch up with Alison and Carl. I'm always suspicious when people make extravagant claims for their friends (the subtext in each instance seems to be "and imagine how bitchin' I must be to hang out with such prodigies"), so I'll say merely that apart from their particular, distinctive and unique good qualities, my two chums have the superlative virtue of possessing a set of cultural and individual memories, tropisms and associations in common with Yours Truly, a rare distinction along this stretch of the descending arc of personal history. It was a treat to compare notes once again.
Posted by Rand Careaga at 10:18 PM 3 comments: