“The Happiest I’ve Been”* 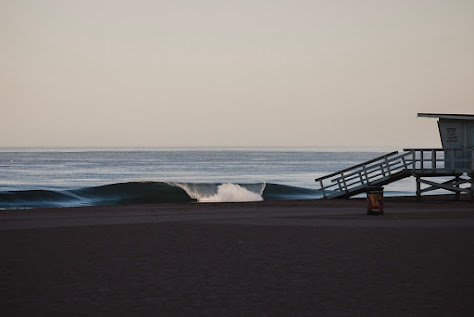 20 September 1970
I was summoned to the telephone at my parents’ home that Sunday morning. A group of high school friends were organizing a trip out to Zuma Beach in Malibu—was I interested? Of course I was.
This was just about a week before my graduating class was to scatter to the four winds, those of us who were going the “higher education” route, to our sundry and far-flung colleges and universities. I, to my disappointment, was bound just ninety miles away, to an institution that would spit me out half a year later; my classmates went on to various fates, some known, some not: that day was the last time I was to see most of them.
Among the teenagers present was my beloved, with whom interludes in the course of the preceding summer and the following autumn are among the tenderest of my youthful memories. That romance did not endure past the turning of the year (more on this anon), but this Sunday at the beach was the capstone of the year. At one point, as we waded in the shallows, a wave knocked my sweetheart down, and her spectacles into the churning surf: groping at my feet, I found and retrieved these before they were swept out to sea, for beaucoup points.
I do not think that, up until this day, I had ever experienced such an episode, so many seamless hours, of sustained joy.
By January the beloved, four hundred miles north of me, had developed other interests. I was unhappy, and peppered her with letters (in that distant era, meine Kinder, one had to convey text messages on paper and via the post) for the next few years until I finally wore her down and rekindled the romance in 1974. Two years later we wed; ten years after that she had reconsidered and, on this day in 1986, took a step, my weeks of anguished entreaties being dismissed, that pretty much put paid to the entire matrimony thing, so that’s another 20 September, a grim one, to bookend the first.
Someone asked me, twenty years ago, “Don’t you think it’s turned out for the best?” I imagine that the ex would agree—from the scant online evidence, she has long regarded our entire common history as an ill-considered detour from her own life’s journey. For my part, the question makes no sense: had I never been divorced, I’d be a different man today. To desire that counterfactual, to make it magically come about, would necessarily involve an act of self-cancellation of the man who might make that wish. So no, I do not rub the lamp. It is what it has been, and I am who I have become. And today is, fifty years on, the twentieth of September.
*The post title is taken from John Updike’s 1959 short story.
Posted by Rand Careaga at 2:46 PM No comments: 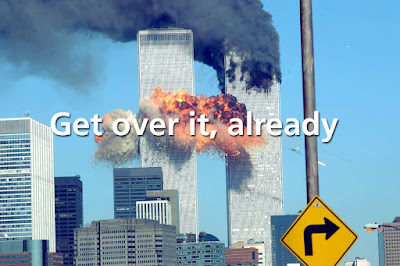 God-fucking damnit, I get so tired of the bleating every year at this time: never has so blameless a nation, so virtuous a people, ever been subjected to so inhumane, so vile an atrocity. Why, innocent people died!

Break me a fucking give. Measured against the number of noncombatants this country has slain from the air during the past seventy-five years, the butcher’s bill nineteen years ago was a rounding error. To the side that has the cruise missiles, asymmetric warfare will always appear an unsportsmanlike proposition.

Posted by Rand Careaga at 6:40 PM No comments: 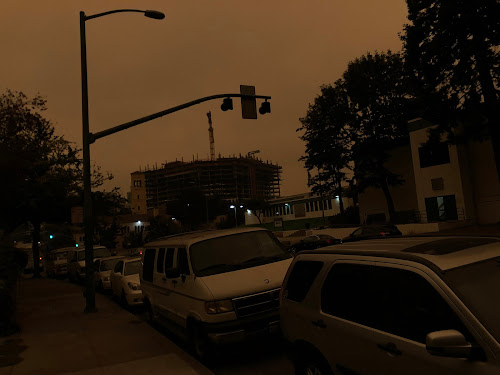 I joined the landed gentry exactly twenty-one years ago. The weather outside The Crumbling Manse™ did not, as I recall, look anything like this, descried today at mid-afternoon.
Posted by Rand Careaga at 7:21 PM No comments:

Labels: Journal of the Plague Year

How far we have come

There was a time—this period would elude the comprehension of my younger readers, if I had any—when the notion of policemen shooting fleeing suspects in the back was presumed to be a characteristic of totalitarian foreign regimes: the Gestapo, of course, in the service of the Third Reich. The East German border guards popping citizens attempting to flee over the wall. Even the Vichy French constabulary in Casablanca as depicted in this piece of popular entertainment in a scene that domestic theatre audiences presumably did not then applaud.

Today? The guy into whose back a Kenosha cop emptied seven rounds is deplored by about forty percent of the electorate as having had it coming for resisting police commands. We’ve come along way since 1942, have we not?

Posted by Rand Careaga at 5:48 PM No comments: 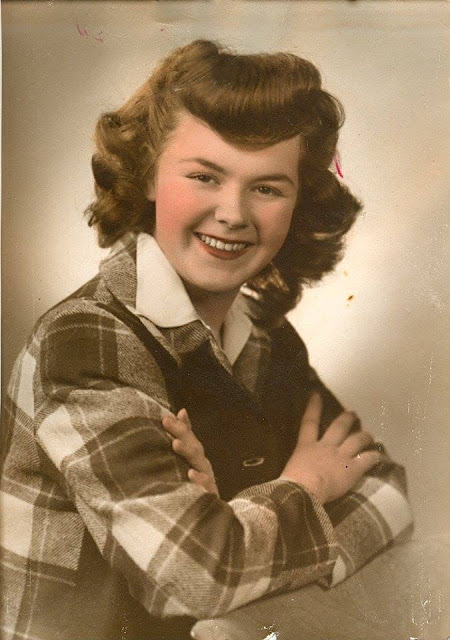 Born this day ninety-four years ago; seen here about a decade prior to my own debut. She stinted routine maintenance, I’m afraid, and pegged out suddenly not quite four months after she reached the Biblical span. An erratic personality with, er, issues that went back to her childhood—my father, marrying her in 1946 in Mexico City after what may be described, with some understatement, as a whirlwind courtship, took her up in the “manic pixie dreamgirl” phase, and could not, at twenty-five, have understood what he was signing onto. Well, water under the bridge; beer over the damn dam, and if the two youngsters had been less hot-bloodedly impulsive I would not be here to condescend to their memories. She was very far from being a model parent, but she loved her children well, if not wisely, and I wish I’d been home to take her phone call forty-eight hours before her death instead of rolling my eyes as I listened to her tipsy recorded message late that night on my answering machine. Here’s to you, Mom, wherever you’ve lodged in the space-time continuum.
Posted by Rand Careaga at 5:39 PM No comments: 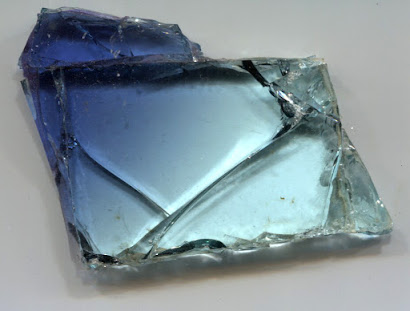 Deborah Clark meant little to me when last we passed one another between classes on 30 January 1968—we were only acquaintances—but that night she arbitrarily secured a place in my memory when she became the first of my contemporaries I knew to have died: a little over a mile from my home, of blunt-force trauma in an automobile accident. She’d be sixty-eight today. I retrieved this artifact from the accident site a few days later, and have morbidly retained it for over half a century.
Posted by Rand Careaga at 2:12 PM No comments: 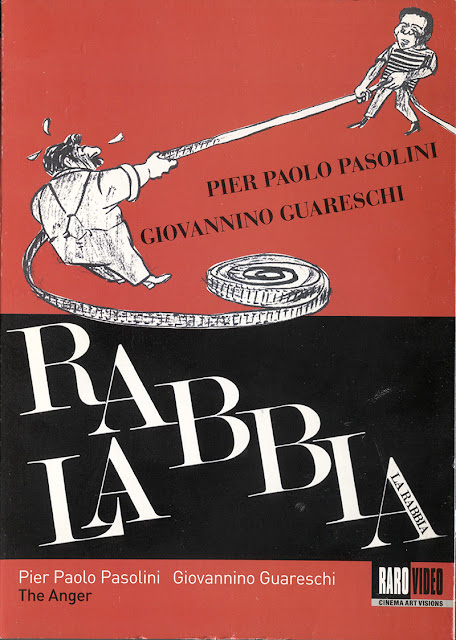 Like many of us, I’m spending more time indoors than usual this year, and particularly as the Bay Area endures a prolonged spell of warmer than normal weather coupled with oppressive (by local standards) humidity and, today, smoke-laden skies. Although this sedentary way of life is doing nothing, or at least nothing good, for my boyish figger, I have been catching up on both my reading and on a substantial backlog of unscreened films. This is one, La Rabbia, “The Anger,” a curious artifact from 1963. Originally conceived as a meditation proceeding from the opening question “Why is our life dominated by discontent, by anguish, by the fear of war, by war?”, the film began as a kind of video montage, mainly of newsreels of the postwar world up through the early sixties, with a spoken commentary written by Pier Paolo Pasolini (1922-1975). Seeing Pasolini’s finished product, the producer, apparently afflicted with an early case of bothsiderism, trimmed it drastically and invited conservative writer, editor, cartoonist and gadfly Giovannino Guareschi (1908-1968; today best remembered, if at all, for his “Don Camillo” stories) to direct a companion piece along the same lines.
The resulting cinematic portmanteau pleased neither man, each of whom cordially detested the other. Guareschi, at least, knew what he was getting into; Pasolini was dismayed when he found his work yoked to that of the older man. Not surprisingly, each director approached the “modern” plight with different emphases. Pasolini (Marxist, homosexual), dreads the encroachment of American-style consumerism on the Italian proletariat, and applauds the liberation, then in progress, of the Third World from its colonial masters. Guareschi (Catholic, monarchist) despises American vulgarity, and deplores Europe’s withdrawal from its African possessions. Nor is he keen on Marxists, homosexuals or the uppity locals giving the colonialists such a hard time.
Pasolini’s half seems, particularly by contrast with Guareschi’s bitter and caustic take, optimistic, almost lyrical. I think it was still possible in 1963 to see in Khrushchev’s USSR the possibility of a humane outcome to the communist experiment without doing violence to one’s intellect, and Pasolini certainly appears to celebrate that prospect (for more on this subject run, do not walk, to your bookseller of choice and secure a copy of Francis Spufford’s astonishing Red Plenty), particularly in the lengthy paean to Yuri Gagarin’s epochal flight. Guareschi is having none of that, and his own considerably bleaker segment is interlarded with the most damning footage (Hungary 1956, Berlin 1961) that he can find. But Guareschi—whose Don Camillo tales, set in the Po Valley during the postwar years, and centered around the “frenemy” relations of a parish priest and the communist mayor of his village, I read in my youth, and which still retain their charm—hates lots of other things besides Marxism: he hates American popular culture; hates the sexual licentiousness associated with it; hates, hates, hates fags; hates the Africans who have been driving their colonial masters off the continent (“where whites and coloreds lived together in peace and harmony”).
La Rabbia was released in a few theatres, garnered tepid reviews, sank out of sight. Pasolini attempted, unsuccessfully, to have his name withdrawn from the film. Novelist Alberto Morovia published a scathing review of Guareschi’s portion: “When the boorish editor of an unnamable Milan magazine [Candido, founded by Guareschi in 1945] knocks on your door and asks you for an interview, do you let him into your house? When a producer asks you to make a film with Guareschi, do you agree? Don’t you know that you should not welcome the editors of certain magazines into your home? Don’t you know that you shouldn’t make films in the company of Guareschi?”
La Rabbia, nicely restored and released in an edition by “RaroVideo,” is an interesting cultural artifact, and I mainly enjoyed it. I must warn prospective viewers that near the end of the film there is footage of a Soviet experiment— Guareschi has included this as an example of commie depravity—that is perhaps the most shocking example of cruelty to animals that I have ever seen committed to film. It is preceded by diagrams, and I exhort anyone who sits through La Rabbia to avert his eyes for the next couple of minutes.
Posted by Rand Careaga at 1:57 PM No comments: